We woke up at 6 am today and rode in the dart to El Patio Restaurant in Presidio, TX.  After a meal, we headed directly to the border (about two miles away) where we stopped by the bridge and took some pictures.  After crossing into Mexico, our side cases and top bags were searched and we had to obtain the visa and vehicle permit for our motorcycles.  It cost us around $60 / each in total and a wait of about 30 minutes.   The border officers were not in a rush to do anything.  They liked our bikes.

Welcome to Chihuahua – the Biggest State of the Republic of  Mexico

After riding for about 20km (15 miles), we were stopped again and our side cases were searched.  The patrol seemed to be quite curious about our bikes and what we carried with us on our long journey to Argentina.  They were very nice.  After another 20km, five armed military guys stopped us and searched us again at a military check point. They looked at our helmets.  Everyone seemed to like our helmet HD cameras.  We talked for a little and took a picture together. 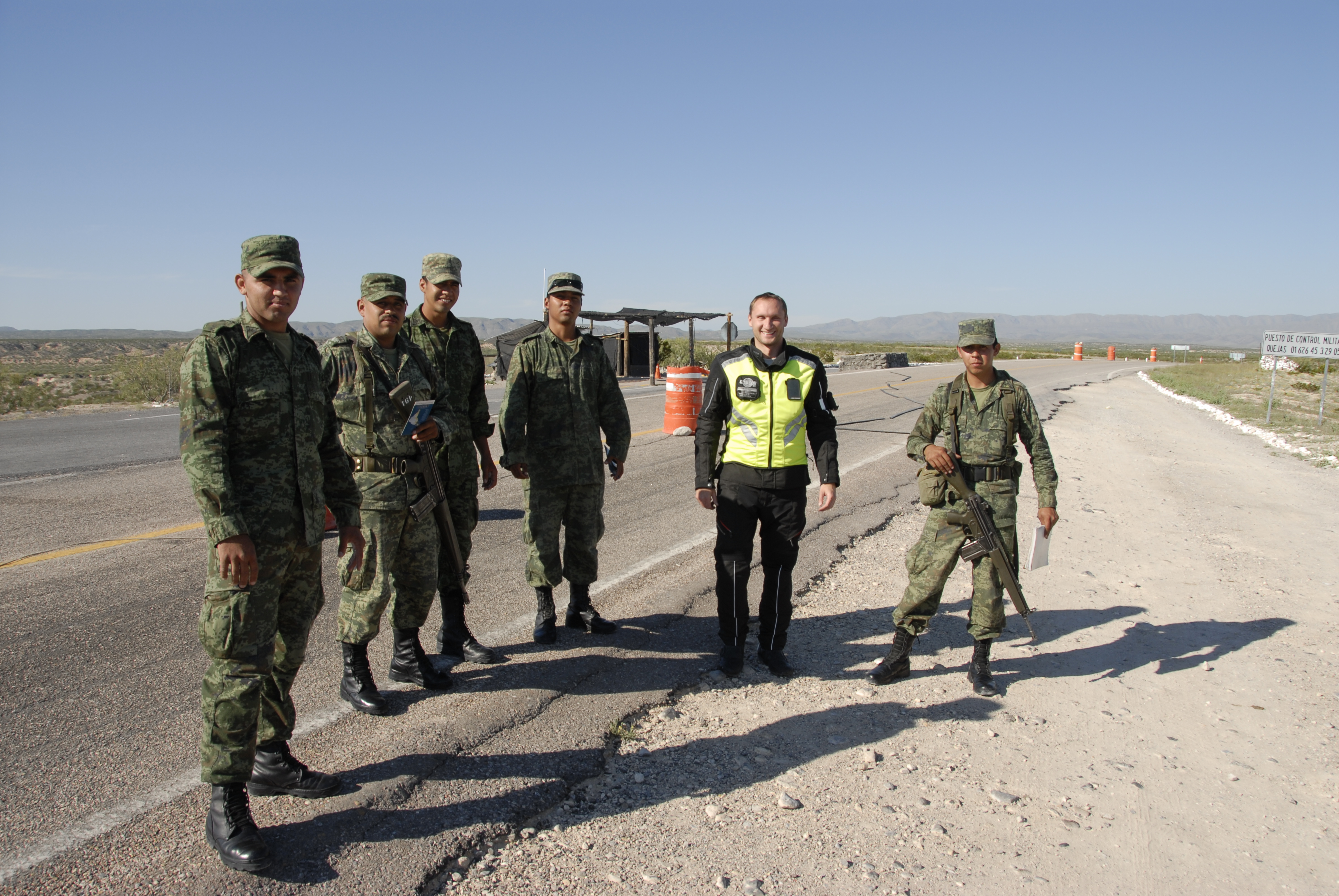 At a Military Checkpoint in Chihuahua State

We headed to Creel via Chihuahua.  When we arrived to Chihuahua, the traffic was very chaotic and no one cared about any traffic rules. It was actually quite dangerous to be on a motorcycle on the road.  The traffic was heavy and the signs were scarce, and we got lost in the center of the city as our map was not detailed enough.  One the locals spoke English and helped us with the directions out of the city.  He asked us what we were doing in Chihuahua with motorcycles.  It is common for gangs to come on a truck, point a gun at you, and take your motorcycle from you. He encouraged us to leave Chihuahua immediately.  We followed the advice and finally found our way out.

On way to Creel, we hit a few road bumps (“topes”) as the signs were not very good, at times, at predicting them.  Once, I went over the speed bumps at 60 mph.  I thought my side cases would fall off but they did not.  On another occasion, Gintaras did not notice a stop sign (“Alto”) at a major intersection and passed it at 70 mph almost colliding with a truck coming at the intersection.  We later took a toll highway and when stopped to pay the toll we did not have any pesos and were forced to pay $7.  After stopping at a rest point, we had a good laugh about our experiences. We love Mexico.

The last 90 km (60 miles) on way to Creel were quite peculiar.  The temperature changed from high 80s F to low 60s F.  I was cold.  There were many trees and I could safely say that it was not much different from Vermont.  The ride was very scenic with many twisty roads and going up and down while being surrounded by the forest.  There were about 4-5 slow moving vehicles on the roads that slowed us down considerable.  We had to pass them as we wanted to get to Creel before dark.

Overall, we loved our first-day experience even though we were quite nervous at border crossing and Chihuahua.  We were extremely exhausted by the evening from stress and riding all day long on difficult roads without any lunch.  At Creel, the hotel was very nice and felt like we were at the ski resort in Utah or Colorado.  Our room resembled a cabin and both of us liked it a lot.  Tomorrow, we plan to see the famous Copper Canyon (Barranca del Cobre).  I learned five Spanish phrases today.