After being exhausted from yesterday, we woke up around 9:30 am, had breakfast at the hotel and headed to see the Barranca del Cobre (Copper Canyon).  We decided to check out from the hotel and stay at another hotel at the farthest point of the Canyon – Batopilas.  So, we began the journey that we will never forget.

The total distance to Batopilas is around 140 km (85 miles).  The first half of the road consisted of many turns and hills and was nicely paved.  There were two lanes – one in each direction.  It was enjoyable to ride and took us about one and a half hours.  Then, the road changed from asphalt to small gravel, but it was still fairly manageable.   Then, the road turned into a dirt road with tiny rocks.  We thought that it was fun.  The road then turned into one lane with rocks.  We rode for about 5 km and had a lot of fun.  We stopped at about 2,500 meters above sea level and took the most amazing pictures of the canyon.  It felt like we were on the top of the world with the river barely seen at the bottom. 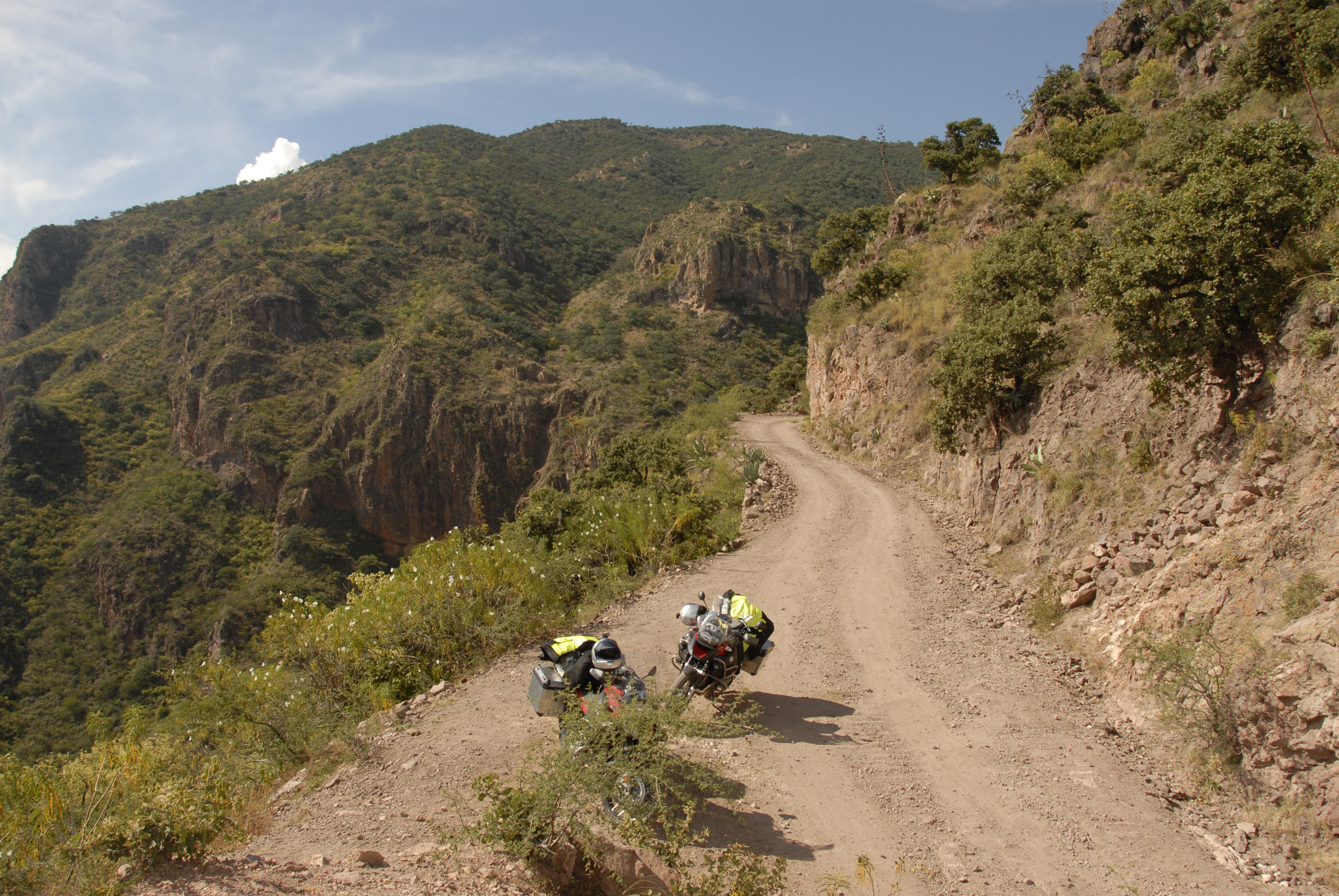 After we got on our bikes, we started the descent that lasted for about 40 km (25 miles).  The road was like a puzzle of switchbacks,  full of rocks, size of a fist.  The ride was extremely shaky.  There were goats and donkeys appearing frequently on the road.  At one moment, I did not see Gintraras behind me.  I stopped in order to wait for Gintaras and my bike slipped on rocks.  A second later, I was on the ground with the bike.  The rocks were just too large and I was on the hill.  I quickly went to search for Gintaras and learned the he dropped his bike on the turn.  We lifted our heavy bikes and proceeded to the next somewhat flat surface.  We became very nervous.  This was only the beginning of a very long descent that lasted for another 3.5 hours with Gintaras falling two more times and me being on the verge of falling a few times.  The road was one lane and did not have any rails to prevent one from falling.  One mistake could cost us lives.  It started to get dark and we were absolutely exhausted.  There were no signs for our final destination either.  At several points, we weren’t even sure we were going in the right direction. 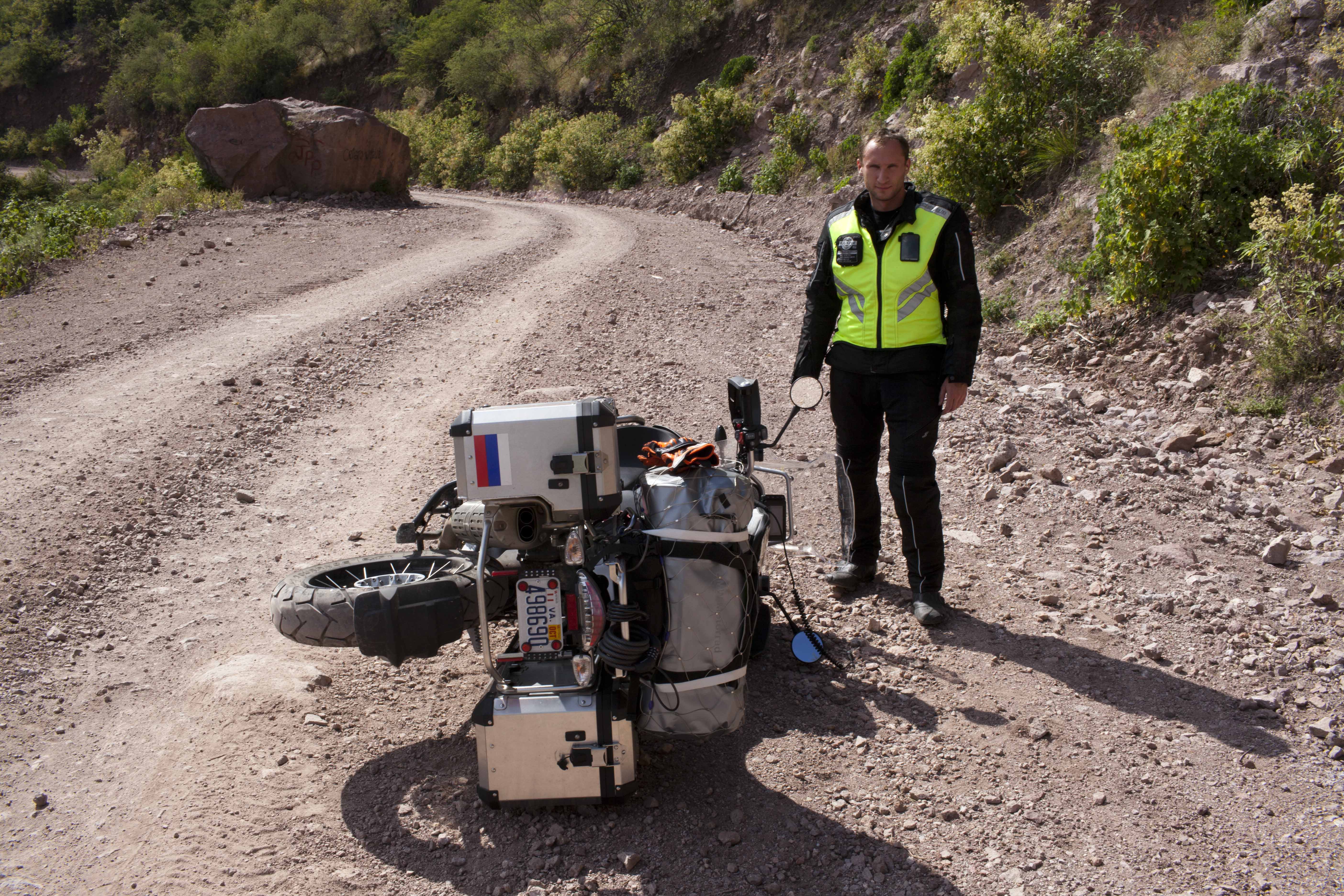 I saw an oncoming motorcycle (the only motorcycle I have seen on this road) and he stopped.  The rider’s name was Chris – a Canadian from British Columbia doing some off-roading.  We stopped and chatted for 15 minutes, took a picture together, and proceeded for another 45 minutes to our hotel, which took us another 15 minutes to find in a small town with very narrow streets.  The hotel owner was very nice and allowed us to park our bikes inside of the hotel.  We literally rode into the foyer of the hotel and parked our bikes.  The bikes were making a lot of strange squeaky sounds and were covered with dirt and dust, just like we were.

Tomorrow, we have to take the same road back.  The only thing that we are happy about is that we will be going up the hill, which we believe will be a bit easier than going down the hill.  We also hope that we are a bit more experienced to take this road but not to say that this will be an easy way back to Creel.