We got up at 6:00 am, loaded all our luggage on the bikes, said good bye to San Cristobal and headed southeast towards Ciudad Cuauthemoc on the Mexican-Guatemalan border.  The weather was perfect, the road was good and we reached the border town in less than three hours.  As we were having breakfast at the local restaurant, a group of motorcyclists parked across the street, in front of the customs building.  They were coming from the XIV International BMW Convention in San Cristobal and, like us, were headed to Guatemala.

The paperwork on the Mexican side took less than half an hour.  The Guatemalan border officers were also quite efficient – they stamped our passports and prepared all motorbike papers for a nominal 40 quetzales (5 USD) fee in less than an hour.  Then one of the officers released the rope, lifted the gate and we crossed the border at 11:47 am – a historic moment! 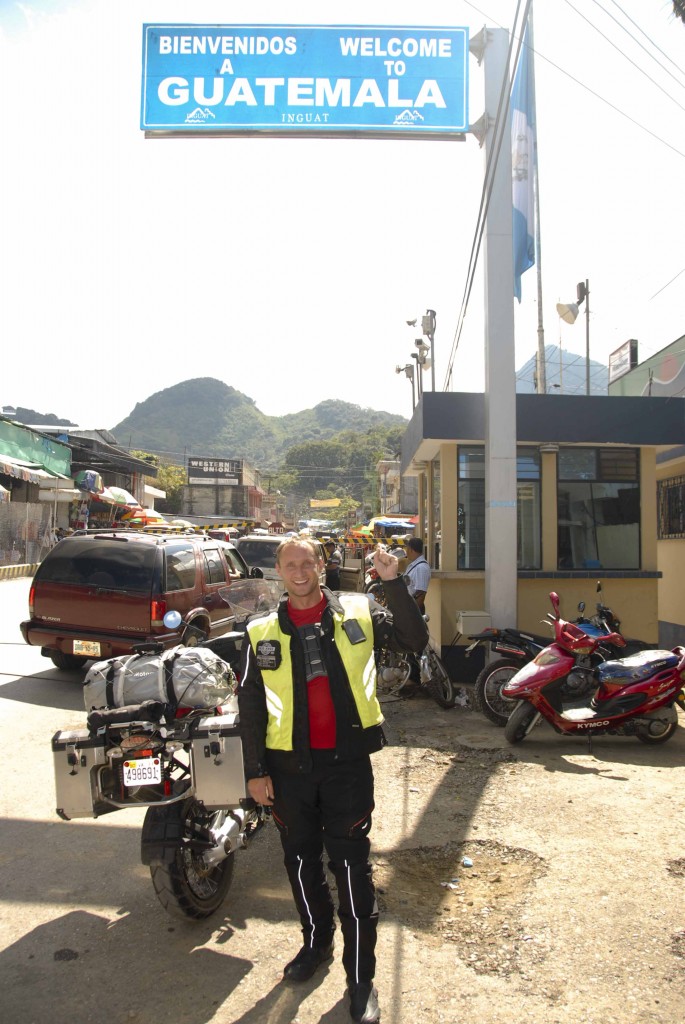 Vadim at the Guatemalan Border

The road on the Guatemalan side was surprisingly good, although we noticed one linguistic difference.  In Mexico, speed bumps are called topes, vibradores or reductores, but in Guatemala – tumulos.  The road went through a spectacular gorge and then started climbing up and up and up to almost 10,000 feet (3,000 m).  We stopped in Pologua, a decent size village, for a lunch.  The food was very good and cost us only 2 USD each, but the restaurant facilities were very basic.

As we were heading towards the Guatemala City, the four lane highway turned into a two lane road due to massive landslides.  The rainy season has just ended in the country, leaving a number of roads in a bad shape.  Fortunately, the two lanes of the highway have been cleared of the debris and we proceeded at a fast pace.

After a few hours, we reached Chimaltenango and got stuck in a huge traffic jam.  Luckily, the shoulder of the road was empty and the police paid no attention, as we rode to the downtown and then took a turn to Antigua – our final destination.  We arrived to Antigua in the dark, after a couple of stops to ask for directions.  There are very few road signs and without help of the local people, we would have certainly been lost on more than one occasion.

We retired early, after a quick dinner at the hotel restaurant.  It was another long day – 11 hours on the road…