We wanted to take a guided tour of Antigua in the morning, however, no English speaking guides were available.  We ended up browsing cobblestone streets around the main plaza, visiting “artesania”, furniture, jewelry shops, churches, and snapping pictures at random.  We briefly stopped at an ice cream place and tried some vanilla ice cream and Pepsi shake called “Nevada” and then sat down for lunch at one of the many restaurants that cater to the tourist crowd.  The food was good, especially calabaza (pumpkin) soup, but at the US prices.

The Arch of Santa Catalina in Antigua

In the afternoon, Vadim embarked on a journey to climb Pacaya volcano.  Vadim was picked up by an old minivan that took him to the foot of the mountain where he and about a dozen other tourists rented small horses (each with a guide) to make the 1.5 hour ascent easier.  It started raining a little bit but the ascent went ok, even though it was a very steep mountain.  The horses handled the task very well.  After reaching the top, the group had to walk about half a kilometer on a narrow steep path closer to the volcano.  The volcano was active and one could see some lava in some holes.  The view was amazing and the experience was one of a kind.  Guatemala has 37 volcanoes and 3 of them are active. 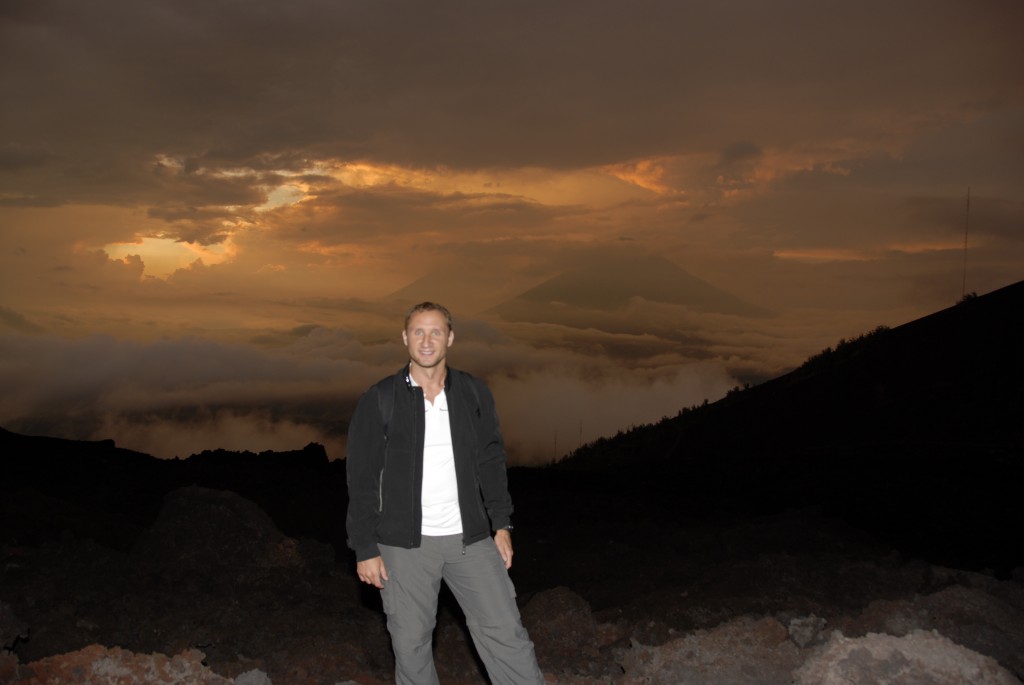 It got dark quickly and the group started the descent.  Many of the horses that brought the tourists up the mountain were not there (poor organization/communication) and as such those tourists had to walk down the mountain in a complete darkness.  Only a couple of people had flashlights.  Vadim was lucky to have his horse and a powerful Petzel flashlight to guide the animal down the slippery narrow path.  A few tourists had some health issues and were moving very slowly and blocking the narrow path.  After a strenuous exercise of clinging to the horse saddle with his legs and hands, Vadim made it to the base.  He pulled out a bag of chips and had a few chips when two little boys came to him and asked him to give them some chips.  Vadim gave them the freshly opened bag as he could not have done otherwise.  The village at the base was very poor and some boys that received tips from tourists went straight to a small shop to buy food.  It was sad.  It took almost 2 hours to get back to the hotel as the driver was going 20 km/hr because of rain and an old vehicle we were driving in.  It was an exhausting but rewarding trip.

We finished the day at a dinner table in the hotel restaurant, listening to live piano and contrabass performance, while chewing beef carpaccio, juicy lamb chops, pork sausage, and flushing it all down with Chilean Cabernet Sauvignon…