We woke up at sunrise and left to El Amatillo, a border town between El Salvador and Honduras.  The directions given by Roberto last night were easy to follow.  We got separated in traffic, however, after exiting San Salvador and only met each other three hours later at the border, where some people approached us offering to expedite the paperwork for a reasonable fee of about 10 USD each.

We gave them our documents and quickly moved through the El Salvadorian customs and migration offices.  The Honduran side of the border looked more chaotic.  We parked our bikes in a shadow and sat down to rest, while waiting for the helpers to finish the paperwork.  Vadim went to get some food and came back with a few pieces of chicken and two bottles of Coke.  One guy sold us some reflective tape for the motorbikes that is supposedly required in Honduras and Nicaragua. 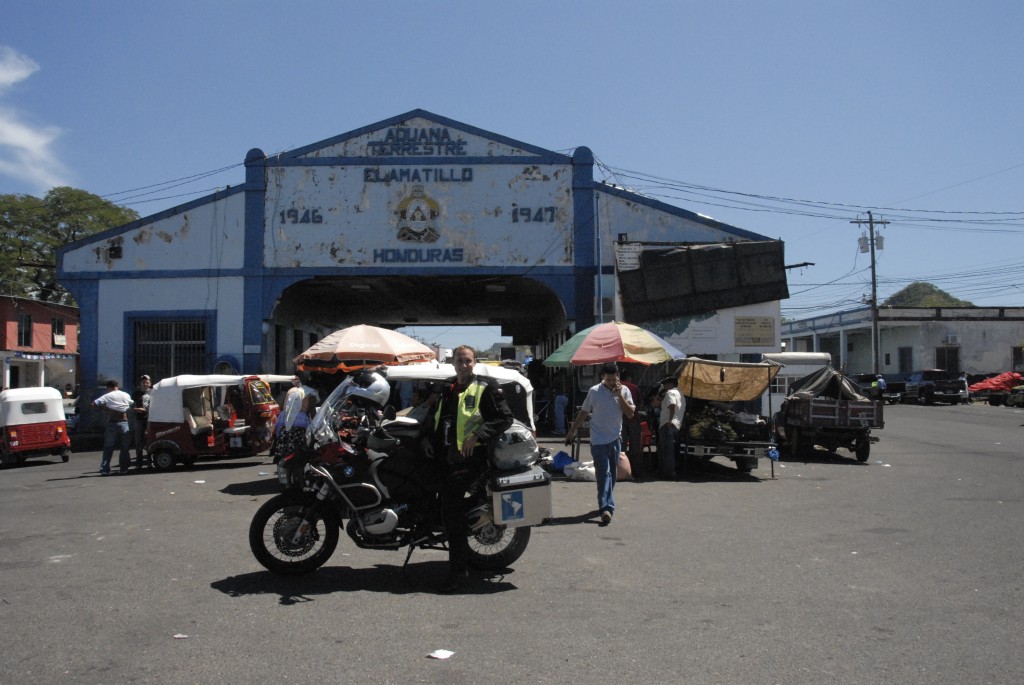 The helpers were running around, disappearing and then re-appearing several times to report the progress.  They returned a couple of hours later with all the documents ready and delivered a surprising news that all-in entry and exit fees for the motorcycles are 150 USD each.  We, of course, balked at the price and went to a nearby customs agency to get some answers, but heard the same story from the lady who worked there.  A couple of Americans were waiting inside and confirmed that they were being “raped” for the same amount as well.  We asked the helpers to itemize all costs, but the conversation turned into an incomprehensible haggle that lasted for another hour.  We left the border, eventually, after paying them 120 USD each.

Just few hundred meters past the border, we were waived down by the Honduran police, who asked us for the documents, then for some money “to buy Coca Cola”, then for some presents (they especially liked our motorcycle gloves and even tried them on).  We used our “No Hablo Espanol” tactics and, after offering 1 USD to one of the officers, were allowed to go.  The same story repeated itself just a few miles later, but the police let us go after a short monologue, since we pretended not to understand a single word of Spanish and offered them no cash.  We stopped at a gas station to get some small change for any future payments to the police.

Every time we saw the police on the road, we were expecting the worst, but nobody stopped us until we reached the Honduras – Nicaragua border at El Espino two hours later.  We met there Jordan and his family, Americans from Wyoming, who traveled by bus to their home in Nicaragua.  It was getting dark and we did not want to ride at night, so we hired (again!) another helper to get us through the border, which looked much more orderly this time.  About hour and a half later and our pockets 60 USD lighter, we entered Nicaragua and headed to the nearest town of Sumoto. 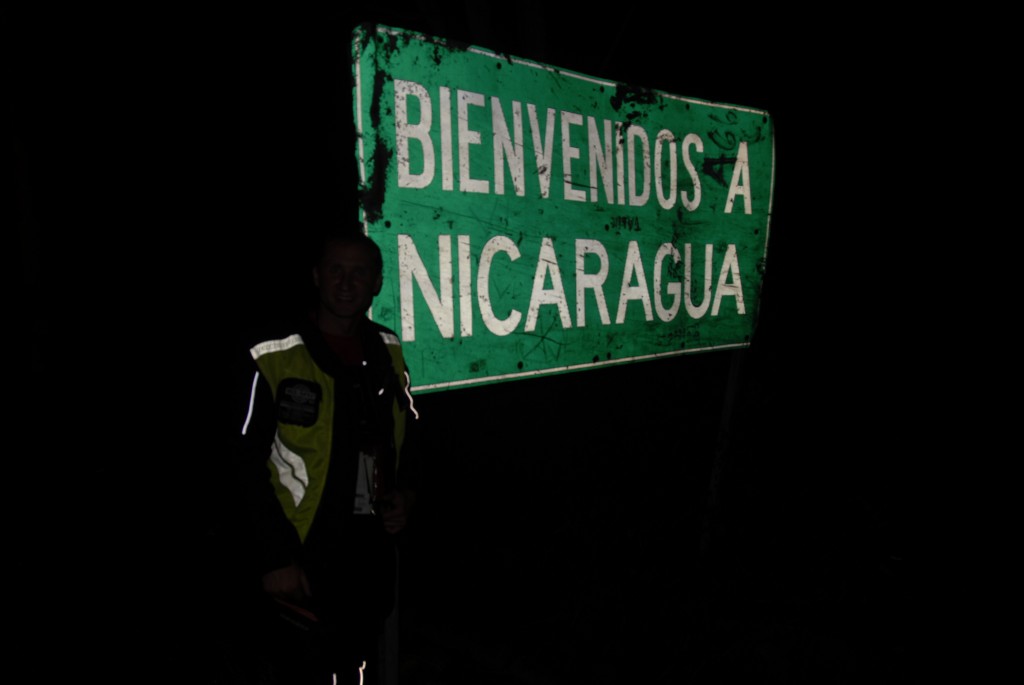 It was pitch dark and we were warned to beware of the cattle on the road, but it only took us half an hour to reach the town and find a budget hotel (12 USD per room).  After taking a quick cold shower, we went out to a small family run “comedor” few blocks from the hotel for some tasty chicken and Coke in the old-fashioned glass bottles.  On the way back, we briefly stopped to watch schoolchildren play volleyball on a field opposite the main church and passed many street vendors, who were wrapping things up for the day.  It was a long an exhausting day for us and we agreed to take a good rest and reach Granada without hurry the day after.