Breakfast in Santiago was more than filling.  We went to the same eatery as last night and the menu was the same.  Everybody was eating meat, so we loaded up our plates with chicken, rice, plantains and filled the bowls up with soup.

It took us four hours to get to Panama City.  The weather was unpredictable – spells of sunshine interrupted by rain.  For some reason, our communication system stopped working, so we used hand signals to “talk” to each other.  We took a wrong turn once, around Arraijan, and had to backtrack for 10-15 min to the Pan-American highway.

The ride over the Bridge of Americas was spectacular; we wished we could stop and snap a few pictures of the bay.  We caught a cab as soon as we entered the city to lead us to Bavarian Motors – local BMW dealership.  The motorbikes were due for some routine maintenance (engine oil change, etc.) and Franciso said he would take care of them on Monday.  He also mentioned than one of the most interesting ways to get to Colombia is on a sailboat.  We have to check this out!

We got a lift to our hotel in a BMW 7-series, a courtesy vehicle with white leather interior.  It took us through the business district that was mushrooming with steel and glass skyscrapers, like Chicago or New York.  The hotel, however, was in Casco Viejo – the old town that reminded us of old Havana with crumbling buildings, but a lot of character.  The hotel was in a nicely restored building that had several suites with fully equipped kitchens and rooms with high ceilings.  We were told that the area is extremely safe (we literally saw policemen and military on every corner) and that the president of the country used to live next door. 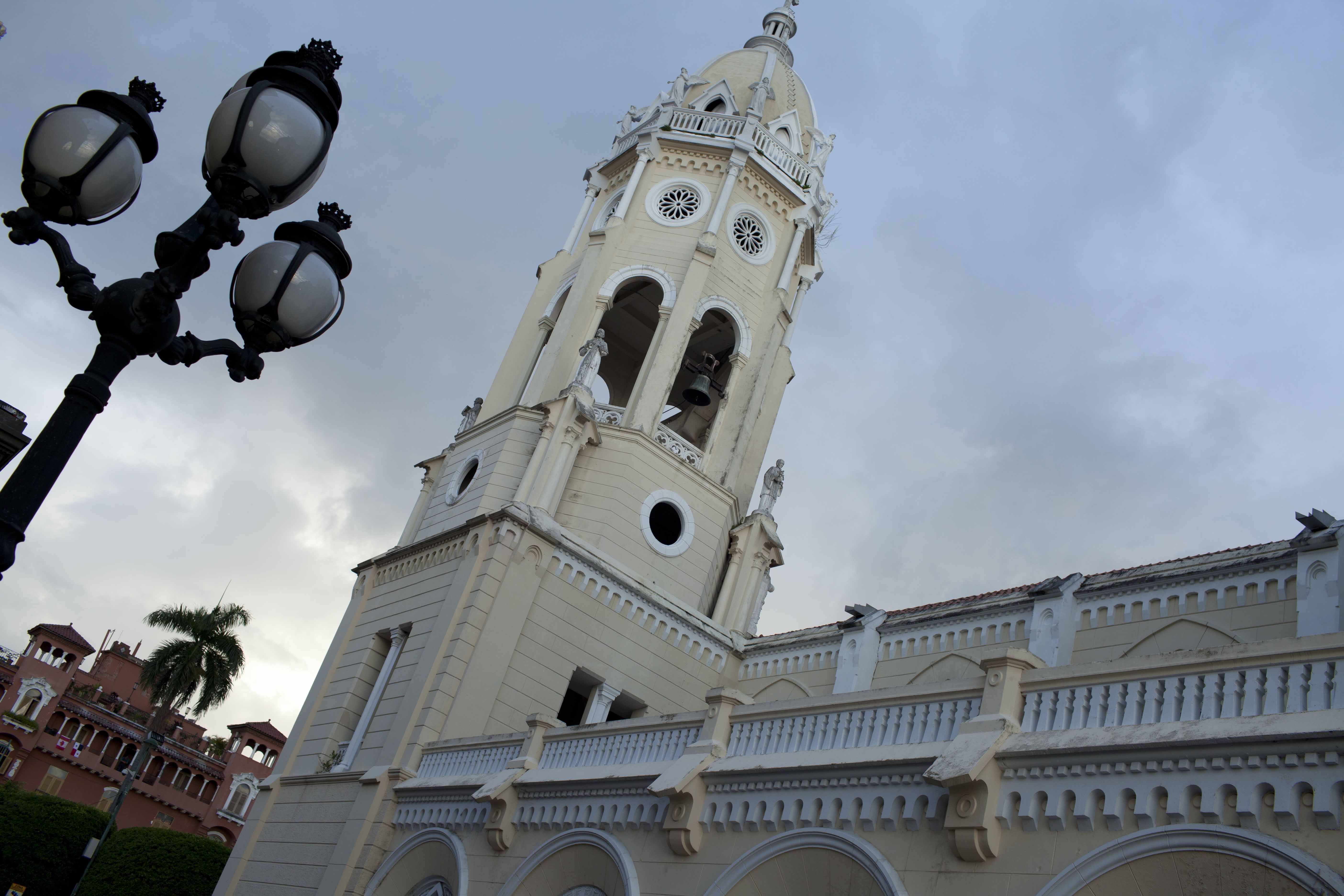 After a short rest, we went out for a walk to the waterfront, which was only a few blocks away.  The streets were narrow, with beautifully restored buildings standing next to abandoned, haunted houses – what a contrast!  A nice view of the business district opened up from the waterfront, but we did not have much time to enjoy it, as it was getting dark and our stomachs were empty.  We went to a nearby restaurant in Plaza Bolivar and had a few excellent starters (beef carpaccio, chicharon and tapas with prosciuto), while waiting for the kitchen to open.  The restaurants do not open for dinner before 6 pm here, and most people start arriving only after 8 pm.  The main dish – fried sea bass – however, was a total disappointment. 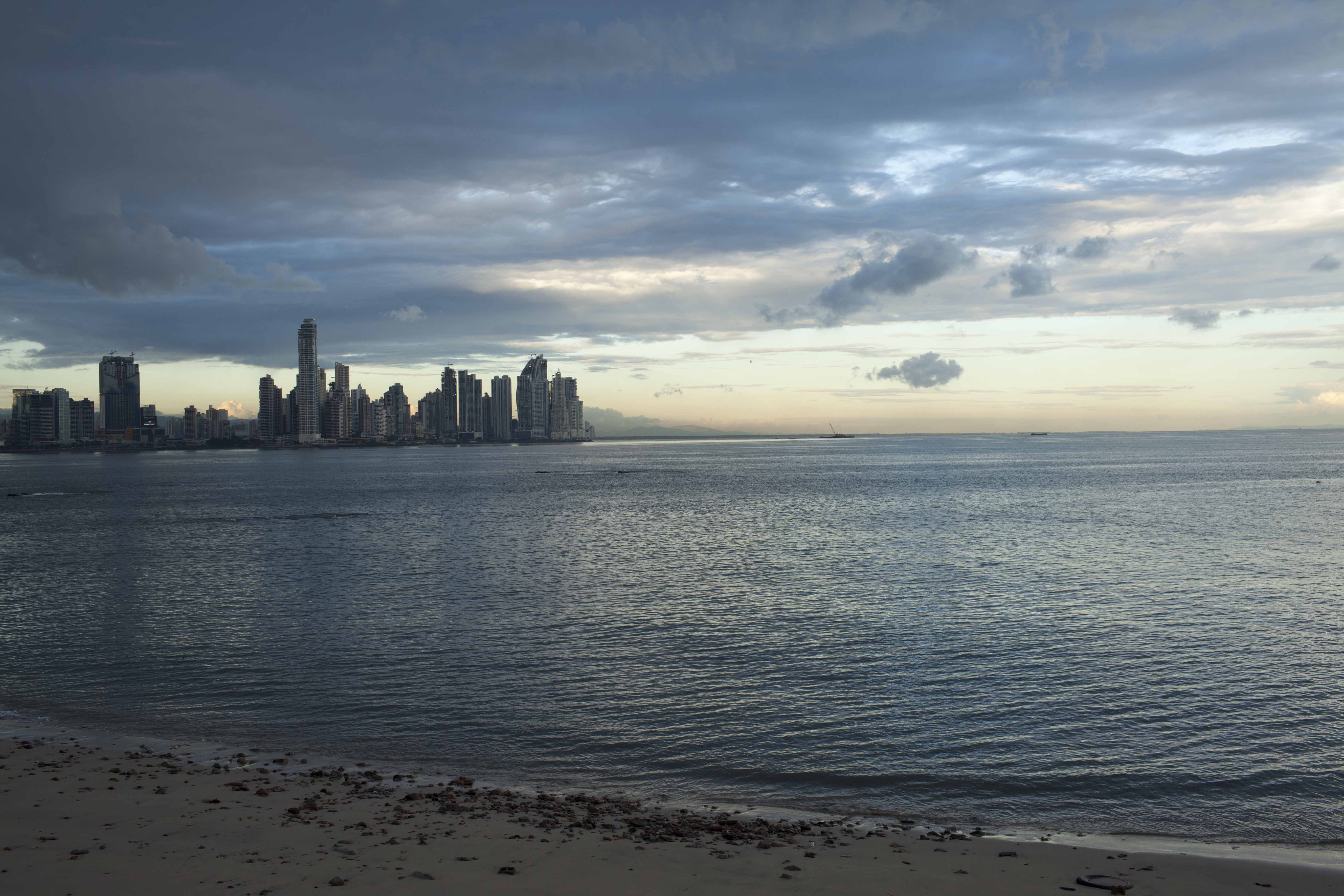 View of the Business District from Casco Viejo

The dinner took longer than expected and we hurried back to the hotel to see Frank, a German guy who we met at the border and who had some ideas about transportation of his vehicle and our motorbikes to Colombia in one container.  We chatted with Frank and his friend Marty from Canada for a couple of hours and then decided to go to Zona Viva, a closed compound of nightclubs, a ten minute ride from the old town.

It was Friday, and we expected to see crowds of people, but the Zona was half-empty.  We paid few bucks at the entrance and then kept strolling back and forth down the main street, collecting wristbands and peaking into twenty or something different clubs that played loud Latin, American and European music.  We soon got tired of sipping beer and people watching, and went back to Relic Bar in Casco Viejo, a usual meeting point for travelers passing through Panama City.  After one more beer, we quit and walked back to the hotel that was only a block away.