The waiting is finally over and we are shipping our bikes to Colombia by sea on Stahlrattte (Steel Rat), a 100 year old German sailing ship!  Sounds like a great adventure!  But first things first…

We had plenty of time to get ready in the morning – pack the luggage, catch a cab to a souvenir shop, buy a Panama hat for Vadim’s dad, stop at a bank – before continuing to the BMW dealership to pick our motorbikes.  The dealer charged us 70 USD each for the engine oil change, but did not bother with any extras (the bikes did not get washed and the tire pressure was low).  It was a workmanlike customer service effort, but at least, we had enjoyed free and safe parking for a week and the bikes were ready to go.  The bike-to-bike communication system dried out and started working again, which was a pleasant surprise.

Our destination – Carti village on the Carribean coast – was a three hour ride from Panama City, down the Pan-American Highway and then on some local roads through the jungle.  The highway was very good, despite some irritating rain.  We stopped to refuel and saw few other bikers on smaller BMW motorcycles pass by; they were almost certainly heading to the same destination as us.  We quickly caught up with them and then followed the group to El Llano, where the road turned north, off the highway, and became much narrower, wetter, curvy, and at some points very steep.  We hit several stretches of road construction / repair, but fortunately, they were all passable.

The local Kuna Indians stopped us twice: first, to check our passports and collect tolls, and then at the entrance to the pier.  Kunas have extensive autonomy and manage coastal lands around Carti, as well as more than 300 islands in the Archipelago of San Blas.

It took us almost an hour to get to the coast, where Stahlratte has been waiting for us at the pier.  Half a dozen people (including an American – Israeli couple whom we met at the Panama – Nicaragua border) were taking off luggage and lining up motorbikes on the concrete pier, while the ship’s crew was loading them one by one onto the upper deck with an electric winch.  A very tall guy (200 cm or 6 ft 7 inch tall Roli from Austria) was running around with ropes and pushing heavy bikes around, as if they were little toys. 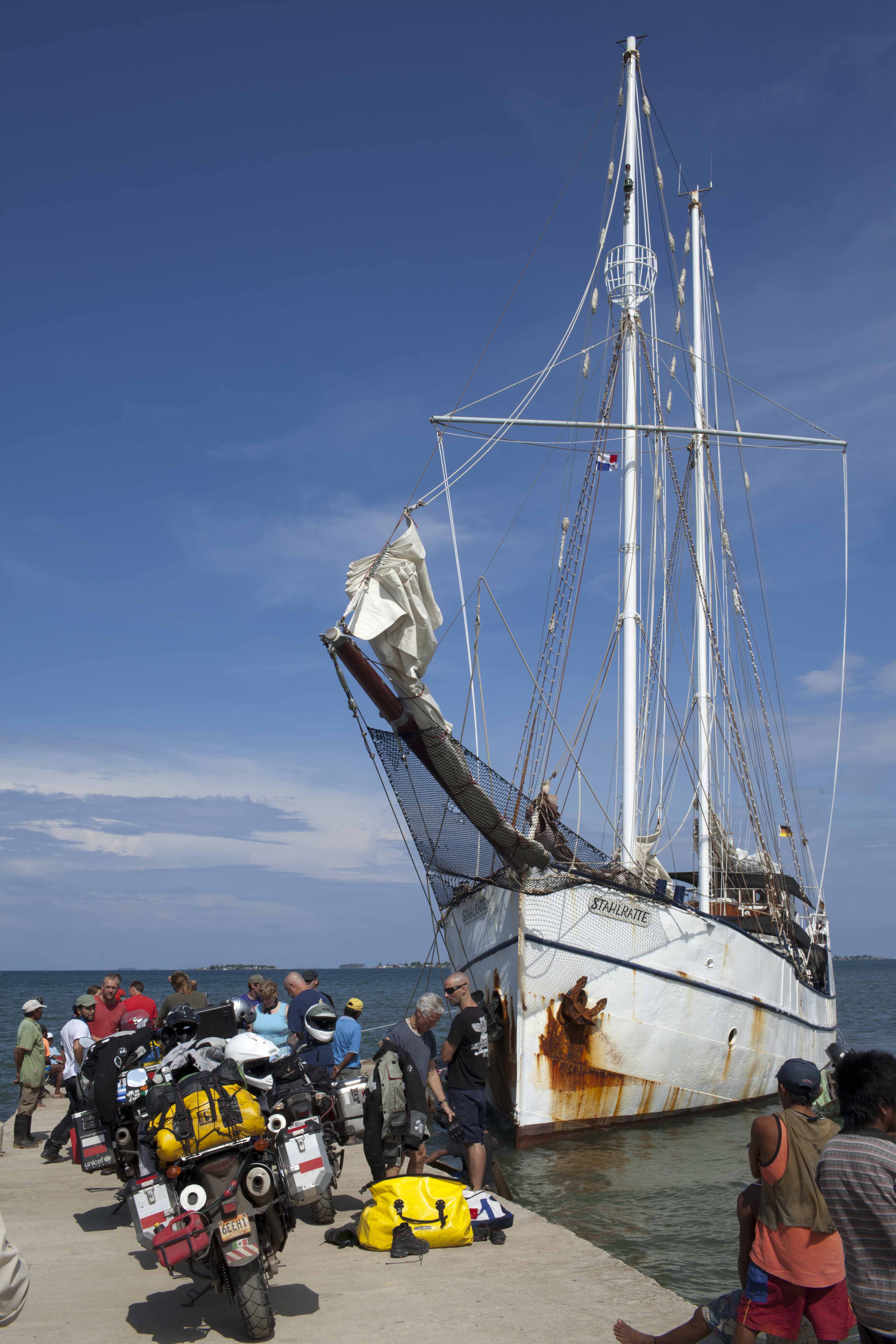 At the Pier in Carti

After the bikes were loaded and secured with ropes on the upper deck, we helped dump the luggage into one big pile on the lower deck – the sleeping quarters with a dozen or so bunk beds.  It took few hours to get everyone on board and sort things out.  The passenger group was very diverse, representing fourteen different countries, but almost everyone was heading down to Argentina, at their own pace, of course. 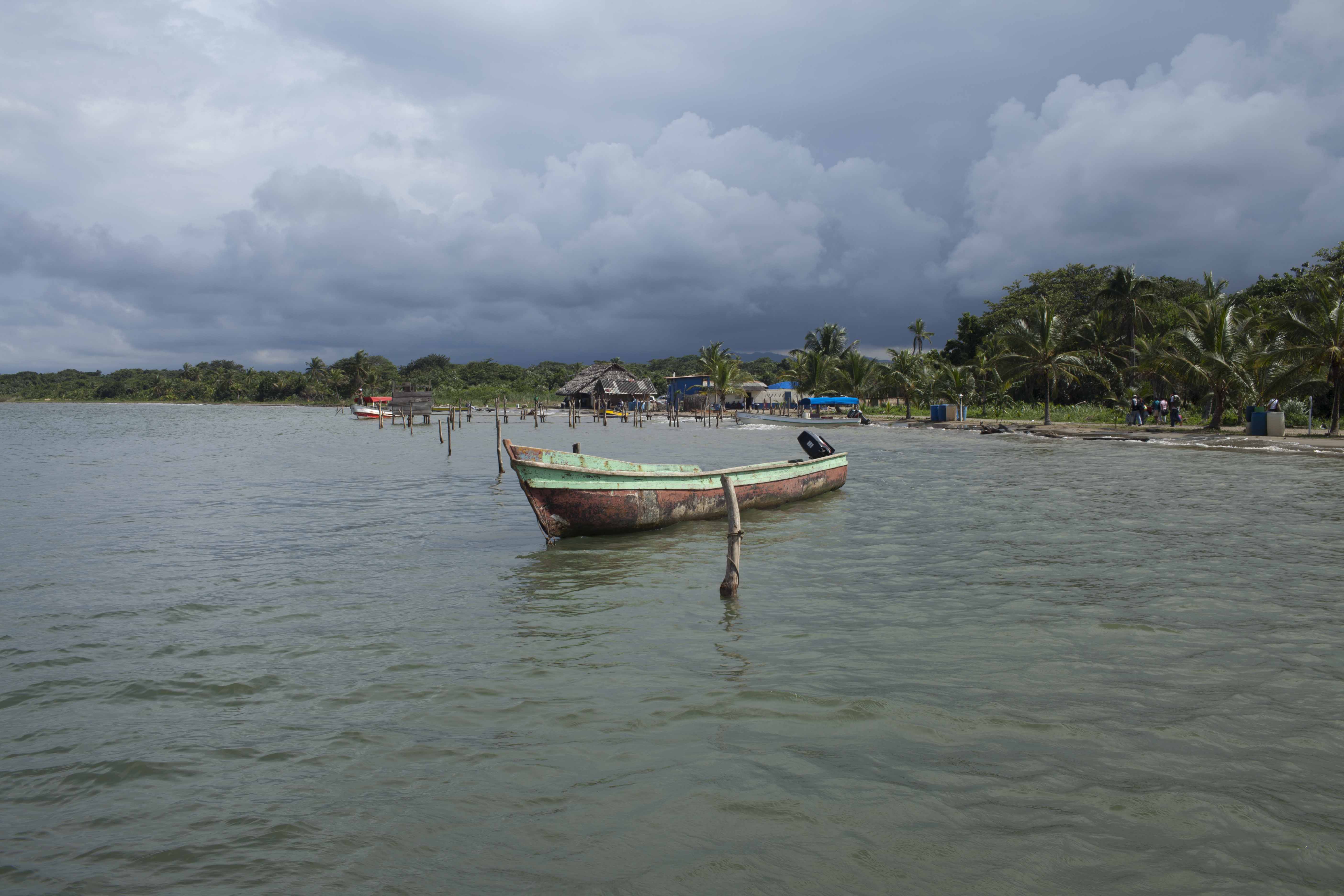 View of the Coast in Carti

It was getting dark, when Ludwig, a forty-something year old captain from Germany, turned on a fifty-something year old engine and the ship started pulling off the coast.  We all gathered on the top deck, around a huge wooden table and tried to get to know each other.  Very soon the ship stopped and we were unloaded to a nearby island with Kuna village on it.

We stumbled through the dark past a number of reed huts to the restaurant, which was a wooden structure without walls, under thatched roof, with wooden floors and a couple of  large tables and benches, and a barbecue on the side.  Few local women and kids were running around, while a Caucasian-looking guy was grilling the chicken.

While we were waiting for the meal, a group of local youngsters performed Kuna dances, the men accompanying with flutes and women with rattles.  Kuna women wore traditional molas, but all men were in jeans and long sleeve shirts.

After the dinner, we returned back to the ship and went straight to our bunk beds.  It was rather warm in the sleeping quarters, despite few air fans spinning all night long.  It took us some time to fall asleep.