As agreed, we arrived to the pier at 7:30 am to pick up the motorbikes.  After waiting for half an hour, we gave a quick call to the captain, who sent a boat to bring us back on the deck of Stahlratte.  The news was that the ship would not be able to dock at the military pier, so we would have to unload the bikes, one by one, to the shore on a small rubber boat.  It looked like the mission impossible to us, but the captain assured that he had done this many times before.

We sat on the deck for few more hours, as more people kept arriving from the shore.  Finally, the crew loaded one small motorbike on the rubber boat and buzzed off, with two people sitting on the bike, keeping it straight up, and the third one driving the boat.  It looked scary!

Soon the turn came for our big and heavy beasts.  One of the bikes was loaded onto the boat by an electric winch; then the gentle giant Roli sat on the back seat with his feet pressed firmly against the sides of the boat to keep the bike straight up; Gintaras sat on the front seat clinching to the handles and pressing his knees against the gas tank as hard as he could; the captain sat down on the back of the boat, started the engine and off we went!  The sea was calm and the boat went smoothly, but we only calmed down after both bikes were firmly onshore.

Happy End – Vadim and Roli Ready to Unload the Motorbike

Happy to feel the firm ground under both feet, we rode to the nearby customs office, parked our motorbikes and walked into a clean white building where many people sat waiting.  It started raining pretty hard and the other fellow motorcyclists kept arriving one by one soaking wet.  We heard that the old town was flooded, the water waist deep. 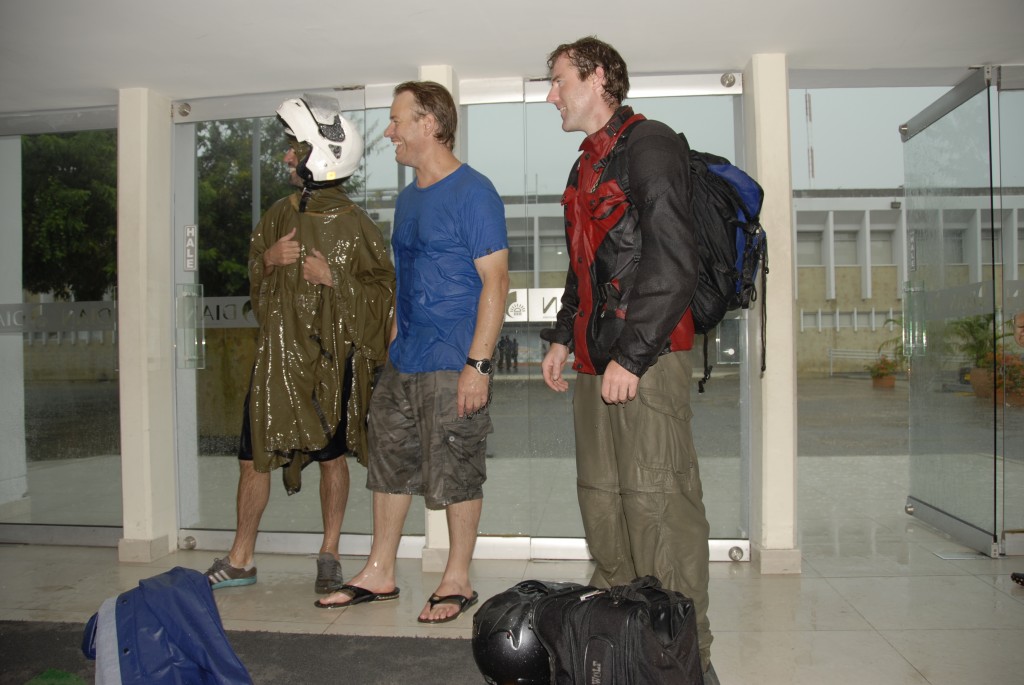 Rainy Season in the Customs Office

We were sitting and waiting, not sure what for.  The son of the customs agent, who had been hired to help us, did not talk much.  The lunch break started, and all customs officers left.  The only canteen in the building ran out of food before we could get anything to eat, and so we sat sipping Coca-Cola and chatting with other people.

Late afternoon, the customs agent, a German guy with huge belly, has finally arrived and disappeared with our documents behind the cubicles at the end of the hall.  A couple of hours later, he delivered good news that the chief customs officer signed the papers, however, for only one half of our group.  We kept waiting and waiting, while a group of people went back to Stahlratte to pick up the remaining luggage.  It was 6 pm, when we finally got our papers back with all the necessary signatures.  It was pitch dark and raining outside.  We called a cab to lead us back to the hotel.

Our troubles were not over yet, as we spent another couple of hours looking for secure parking for our motorbikes.  The first two parking lots close to the hotel would only keep the bikes overnight, but not during the day.  We had to ride outside El Centro, to the neighboring and somewhat shady Getsemani, to park the bikes in a building that looked like an abandoned warehouse with leaky roof.  The guy working there assured that it was safe and we did not have any other options.

We walked back to the hotel, changed the clothes and went out for dinner.  On our way to the Customs Square (not a joke), we ran into two guys who traveled with us on Stahlratte.  We all went to a small restaurant for some traditional Columbian food – chicken and Club Colombia beer.  Josua, the Austrian guy, was extremely entertaining, as he kept running out during the meal to check out the girls walking down the street.  Clearly, his behavior was due to the prolonged stay in a confined environment on Stahlratte.

We slept well all night.  Our sailing adventure was finally over.