It was one of those rare, dry and sunny, days of the rainy season.  We left Caucasia late morning, around 10 am.  There was no reason to rush, since Medellin was only few hours ride away, down the Pan-American highway.  As we were heading south, we first noticed several houses half-submerged under water and then vast expanses of agricultural land that looked like a huge lake with only treetops sticking out.  Due to massive rains this season, Rio Cauca flooded the entire region and caused a lot of damage.

The road, however, was surprisingly dry and in good condition.  It was built on a slightly elevated foundation, probably, to prevent the damage from seasonal floods.  We were enjoying a smooth ride for about half an hour, but then noticed a couple of kids waist-deep in water… in the middle of the road.  We could not believe our eyes, the road was completely flooded!  A huge truck with its lights on was slowly moving across, making waves, while the kids cheered on.  There was no way back.  We waited until the road was completely empty and started moving forward in the first gear. 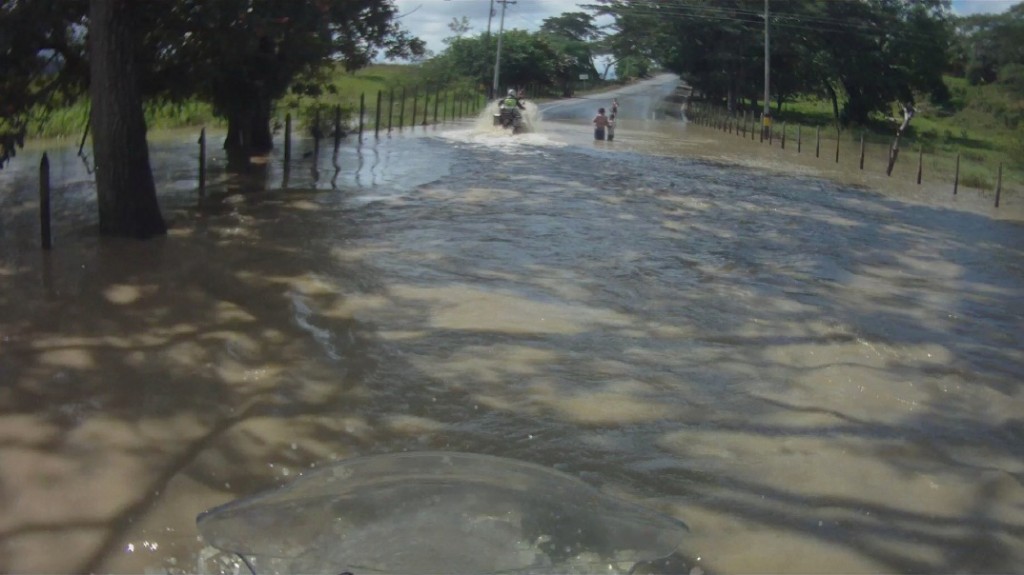 The motorbikes handled the task surprisingly easily, the water splashing over and above the windshields.  We were on the other side in no time, wet, but happy.  Few minutes later, we hit another flooded road crossing, but this time it was more fun; we turned on our helmet cameras and moved on. 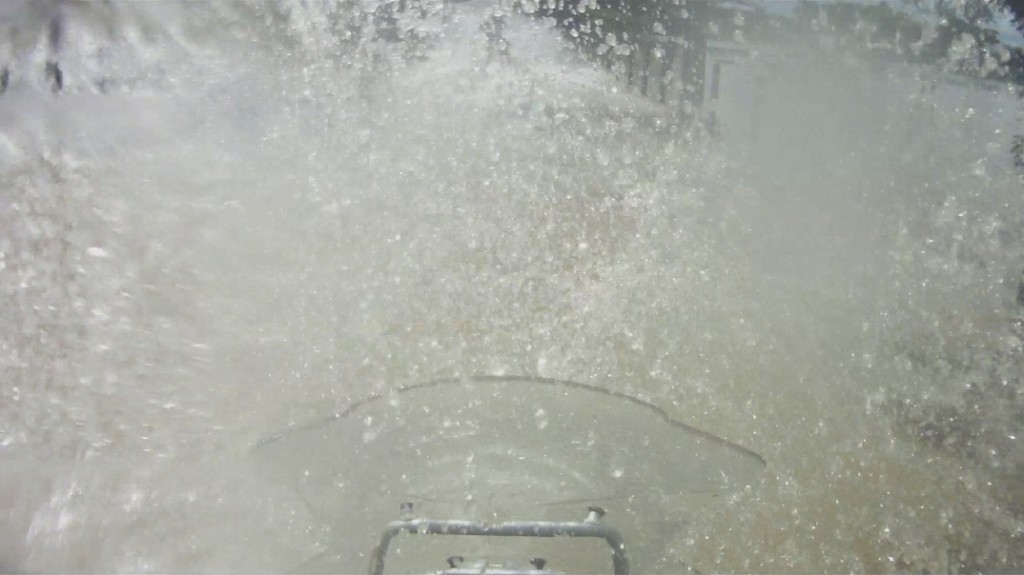 The road continued up into the mountains and the wetlands dissapeared.  We stopped for lunch, but realized that we have no Colombian pesos.  Fortunately, one small restaurant near Cienaguita accepted dollars.  We spread our wet gear in the afternoon sun, but it was too hot and we had to move inside to finish our chicken soup and chicken with rice and Coke.

The road continued climbing up and up, above 9,000 feet (2,700 m).  We were moving slowly, passing dozens of crawling and fuming trucks.  A couple of hours later, we got the first glimpse of Medellin, a huge city in the valley surrounded by mountains from all sides.  We stopped at the outskirts of the city and caught a cab to escort us to El Poblado – a chic quarter in the southern part of the town.  It took us another half an hour to get to the hotel in a nice white modern building, close to the main street.  We parked our bikes in an underground garage, changed the clothes and went out to get some food.

Vadim stopped at a pharmacy to buy some cold medicines, since the antibiotics that he was taking, have not been helping much.  The pharmacist also suggested some restaurant at a nearby park for dinner.  We were very pleasantly surprised when we reached the park – Lleras Park – which was beautifully decorated with Christmas lights.  There were a dozen of restaurants and bars around the park; we sat down at an Italian place and had a very nice cold meat antipasti and lasagna.

Our first impression of Medellin was very favorable – clean and beautiful city.  On our way back to the hotel, we passed by a couple of other parks, also beautifully decorated for the upcoming holiday season.  The celebratory mood was in the air… 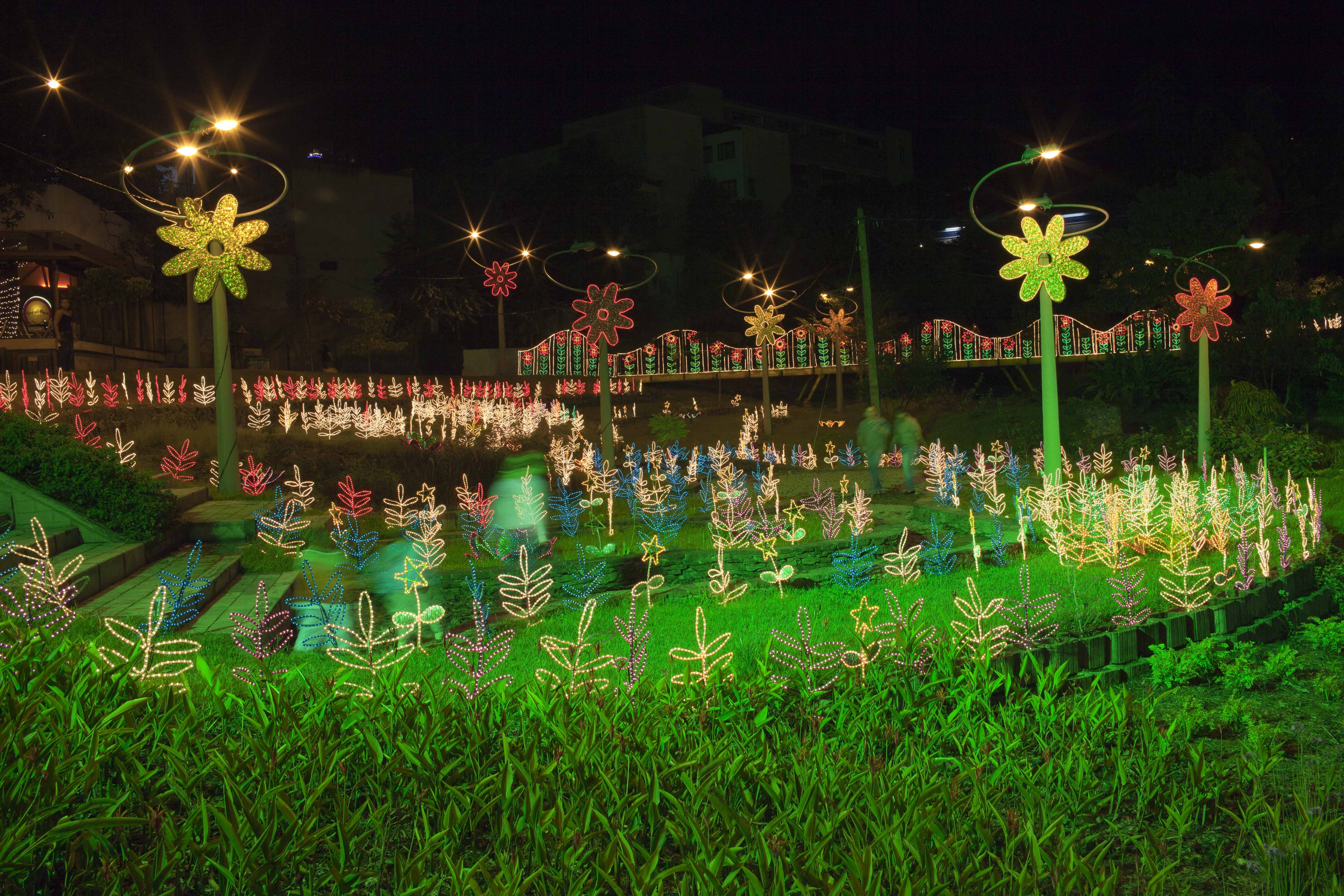