Day 66 – To the Mountains (Salento, Colombia)

We started from Medellin quite late, around 10:30 am, and got lost right away, since the main road in El Poblado was closed due to some amateur cycling competition.  Vadim briefly tried to join the competition on his motorbike, but was immediately turned back by the police.  Then Gintaras’ GPS led us a couple of blocks against the traffic and we got briefly separated, but eventually found each other and the road that headed south, towards the Pan-American highway.

Our communication system stopped working and we resorted to the universal hand signals to express our intentions, confusion and anger.  We stopped at a gas station to fill up the tanks and ask for further directions.  The highway was just a couple of blocks away and we found it rather easily.  Few miles later, however, we took a wrong turn (again!) and continued to the central square of a small beautiful town, where we asked for directions in fluent Spanish and got back on track few minutes later.

The road was nice, despite some intermittent drizzling rain.  Vadim stopped a few times to take pictures of beautiful mountains and the ferocious Rio Cauca.  We stopped for lunch by the road, next to the river, few miles past Bocas and had some nice churrasco, prepared on firewood.  A couple of policemen arrived on a nice Suzuki motorbike and sat down for lunch at a table behind us. 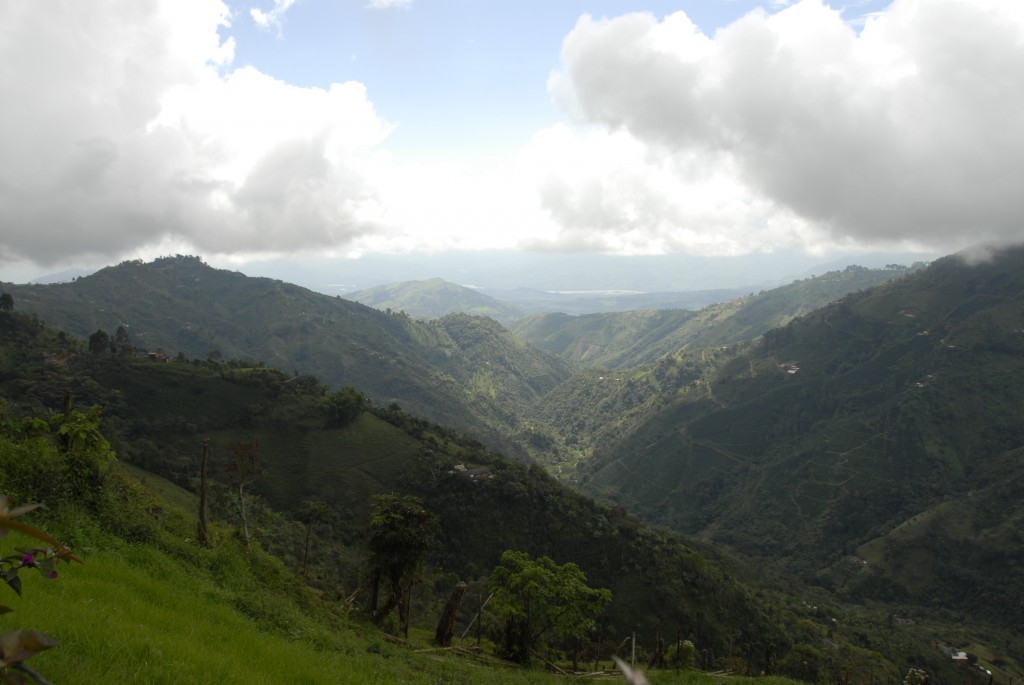 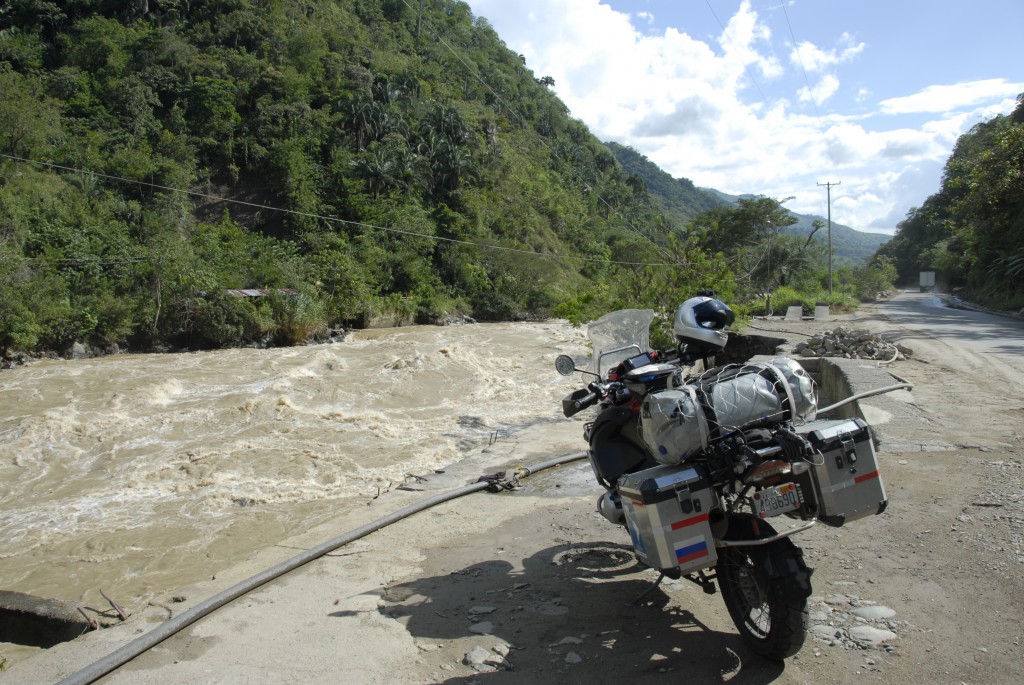 We passed a couple of toll booths – “peajes” – on the highway, but none of them required any payments for motorbikes.  We simply followed through the special lane on the right hand side and zoomed on.  We love Colombia – the most motorcycle-friendly country in the world!

We decided, for the last time, to rely on our GPS’s to guide us through a city; this time it was Pereira.  The directions were confusing, but we miraculously got through the town to the road towards Armenia.  Shortly afterwards, we noticed a sign towards Salento – a small, but beautiful resort town in the mountains – our destination for today.  We followed a couple of scooters down the narrow and winding road, while enjoying beautiful vistas.  Our hotel – Posada del Café – was located on a picturesque street full of artesania shops.  We were greeted by an English-speaking lady who showed us a small room and let us park the bikes in a garage.  The hotel looked very homey, with a nice garden in the middle and full of little knickknacks on the walls.

We took a quick cold shower and then went out for a dinner at La Laurita – a nice restaurant few blocks away from the hotel with traditional Colombian interior and painted leatherback chairs.  We ate and drank too much (it’s becoming a recurring theme): Club Colombia beer, white vine, patacones with cheese, chicharron, smoked trout and fried trout with shrimps (local specialties), coffee and some cake.  After the dinner, we dragged our bellies a couple of rounds around the main plaza and then returned back to the hotel, where Vadim booked a tour to a nearby hacienda for tomorrow.  The mountain air was very refreshing, but it was noticeably cooler than in Medellin.  We wrapped ourselves up in all the blankets that we could find in the room and fell asleep.