After a small but tasty breakfast, Vadim was picked up by a local farmer Omar, who owned 20,000 hectares (50,000 acres) of land in the nearby Los Nevados National Park, in the Andes.  Omar inherited the land from his father and knew the area very well; he spoke good English and thus was an excellent guide.  Omar’s old 4×4 Chevy SUV with a manual transmission took them up a muddy road in the mountains.  The view was breathtaking but it got cold very quickly, as they reached the farm at around 3,500 meters (11,500 feet) above the sea level.  The farm was literally above the clouds.  Omar had a lovely house where a hired farm administrator lived in with his family. 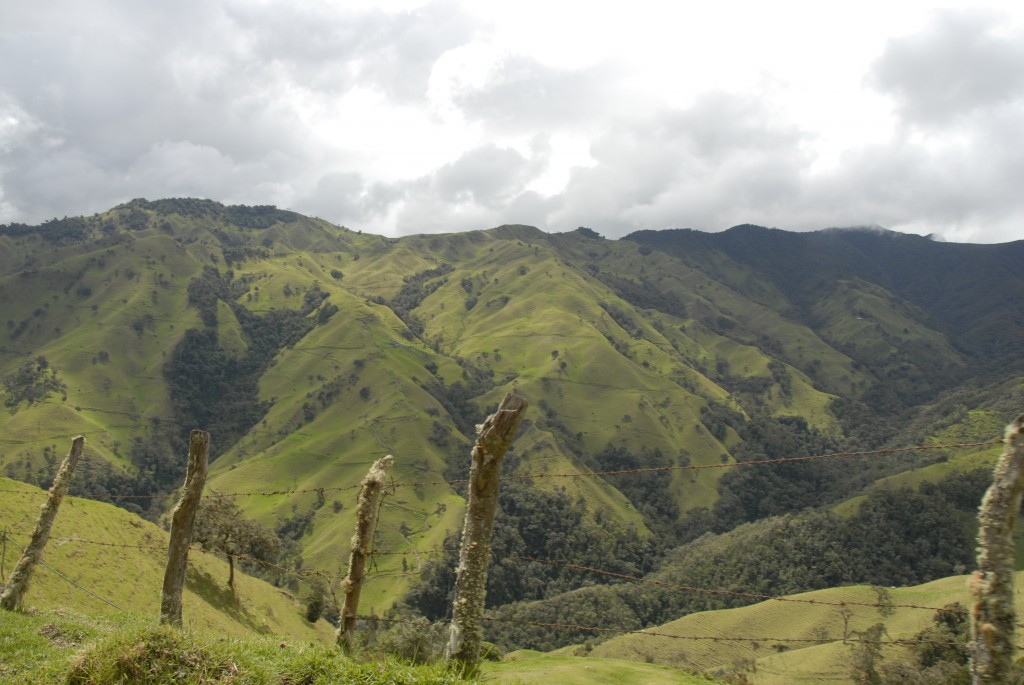 View of the Andes from Omar’s Farm

The family had prepared some nice fruit snacks and fresh coffee, and after the breakfast, Omar and Vadim headed further up to the Los Nevados National Park, on the other side of the mountain.  It took them about an hour to get there, over the peak of 4,200 meters (14,000 feet) at the highest point.  It was a lot warmer on the other side of the mountain as it was getting more sun.  The scenery was nothing Vadim has ever seen…mountains, green grass, trees, and hundreds of wax palms – the national tree of Colombia.  An interesting fact, on average, a wax palm reaches the height of 70 meters (over 200 feet) and the tree is now protected by the Colombian environmental laws. 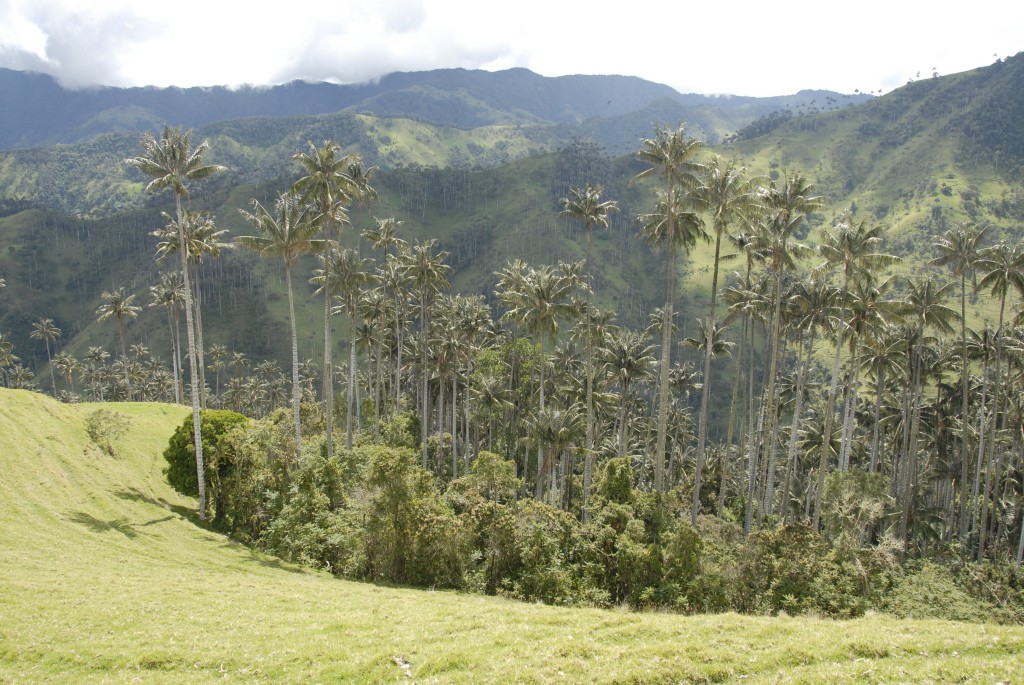 Forest of  Wax Palms in the Los Nevados National Park

Vadim and Omar descended down to take some pictures, where there were many cows grazing the beautiful green grass.  These cows were originally imported from Normandy, France and had adapted well to the local environmental conditions: long fur for cold weather and the ability to navigate mountainous terrain.  It was an amazing experience to see the pristine and well preserved nature.  There were no tourists or cars during the whole trip.  In the afternoon, Omar took Vadim back to his farm house, where they had a nice lunch of potato soup and pork steak with rice and French fries.

Close-Up Picture of a Wax Palm

Gintaras spent the entire morning working on the website and then went out for lunch to a restaurant next to the central square.  The food was excellent: local farmed trout, local black coffee and chocolate cake.  He took a leisurely stroll back after the meal, exploring the picturesque streets of the town, snapping pictures and observing the local people. 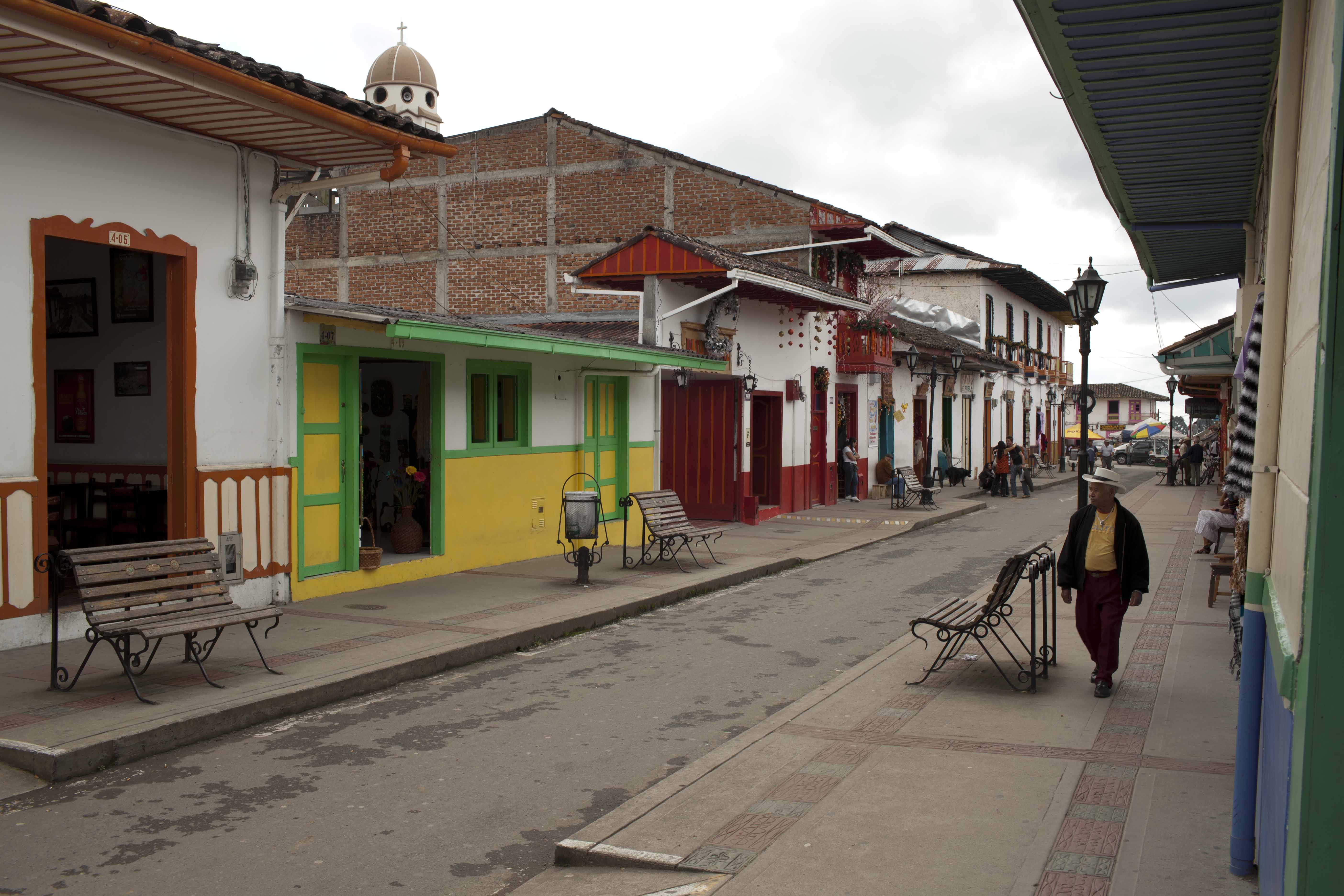 A rain started in the afternoon, soon after Vadim came back from the farm.  The town became completely deserted; all stores closed their doors and there was not a living soul in the streets.  We asked the lady in the hotel to help us make hotel reservation in Popayan and then went to the garage to troubleshoot the malfunctioning communication system on our bikes.  We probably spent an hour swapping helmets, radios, cables, and electronic units, trying to pinpoint the problem that was causing static noise in Vadim’s headphones.  As we were about to give up, the problem miraculously disappeared.

We went out to a dinner after the rain had stopped, but there were still very few people in the streets.  We sat down in an empty restaurant on the central square, next to the police station and had some Chilean red vine, trout, chicken, patacones, grape and passion fruit mousse for desert, and, of course, black coffee.  We went to the local cancha de tejo to throw some rocks at gunpowder, but the place was closed.  The whole town looked dead.  It got chilly and we returned back to the hotel.