It was grey and early morning.  After a quick breakfast, we went to pick up the motorbikes from the parking lot a couple of blocks away.  A sleepy guy opened the gate, but he had no change, so we rode back to the hotel to break a bill.  A group of locals gathered around us on the street and took some photos in a drizzling rain.

We relied on our GPS’ pirated maps to get us out of the city to the Pan-American highway.  It was rainy, cold, cloudy and foggy day; we rode very slowly and carefully for about a couple of hours.  At one point, another BMW GS1200 with Colombian license plates passed us; we quickly lost him out of site.  We stopped for a short break at gas station to drink some hot tea from our Thermoses and clean the headlights and rear lights of the motorbikes.  Suddenly, the same BMW motorcyclist appeared from behind a curve and stopped by.  His name was Alejandro and he was heading to Pasto.  We gave him our card and rode together for some time through intermittent rain.

The road went through beautiful mountains and we stopped for lunch at a small restaurant perched on a hill.  The meat tasted like rubber, but we nearly choked for a totally different reason.  As we were eating, a large piece of land started sliding down the side of a nearby mountain, right before our eyes.  We heard a rumbling sound and few seconds later, the road that we had just passed was under a pile of dirt and rocks.  A long line of busses and trucks started building up in both directions; the road was impassable.  We could not believe how close we were to a disaster or a major delay.

We continued south after the lunch at reached the border at around 3 pm.  We heard different opinions about the Colombian-Ecuadorian border, but an hour later we could say with confidence that this was the easiest border so far.  Migration officer stamped our passports and we received temporary vehicle importation permits in the customs in no time.  There were no insurance requirements or any other obscure paperwork, everything was clear and efficient.  What a nice surprise! 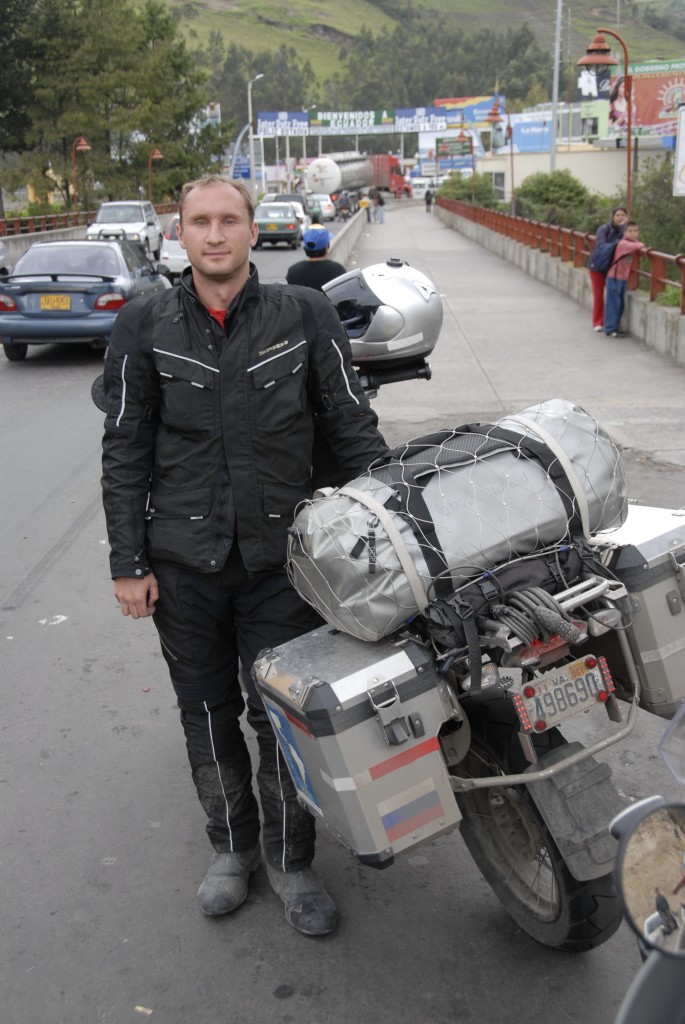 We stood happy with all our papers ready, when a few currency changers approached us in the parking lot.  We only had a small amount of Colombian Pesos and wanted to exchange them into US dollars, the official currency in Ecuador.  “40 USD”, whispered one changer, quickly running his fingers through the calculator.  To double check, Vadim took their calculator and punched in the numbers; it showed “40”.  Fourty dollars was the number, but the mental math did not make sense.  We took out our IPhones and reran the numbers; our calculators showed “60”.  Then it dawned on us; these suckers were using a fake calculator and tried to cheat us out!  We grabbed 60 dollars and rode off, Vadim shouting well-deserved threats and obscenities at the changers.

The border town of Tulcan was just few kilometers away.  It was not a big town, but we circled for half an hour around the city center until found our hotel.  The check in was very long and the hotel staff was completely incompetent; they were not even able to give us password to the hotel’s Wi-Fi network.  At least, our bikes were parked safely and we had beds for the night.

It was very cold both in inside the hotel and outside, as we were more than 10,000 feet (3,000 m) above the sea level.  We went to a Colombian-Chinese restaurant across the main square and had an inexpensive dinner.  The food was good, but the service was strange; the waiter was bringing out dishes in a random order.  While we were eating, a number of cars passed by beeping loudly, with people shouting loudly out of the windows.  It was some kind of festival or event, but we never figured out what was it all about.  We went back to the hotel, bought few things at a small supermarket and went to sleep after an exhausting day.